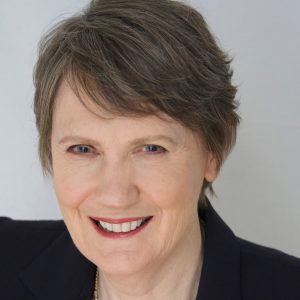 Helen Clark is a respected global leader on sustainable development, gender equality and international co-operation. She served three successive terms as Prime Minister of New Zealand between 1999 and 2008. While in government, she led policy debate on a wide range of economic, social, environmental, and cultural issues, including sustainability and climate change.

Helen then became the United Nations Development Programme (UNDP) Administrator for two terms from 2009 to 2017, the first woman to lead the organisation. She was also the Chair of the United Nations Development Group, a committee consisting of the Heads of all UN funds, programmes and departments working on development issues. In 2019 Helen Clark became patron of The Helen Clark Foundation. She is an active member of many global organisations. 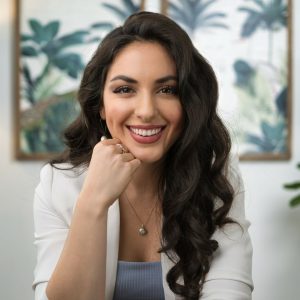 Shadé Zahrai is recognized for her superhuman ability to translate neuroscience and psychology research into practical, actionable strategies to accelerate success.

As Principal and Director of her positive-leadership consultancy, Influenceo Global, she consults, trains and coaches leaders and teams from startups to Fortune-500s, breathing life into organisational culture to enhance change-readiness for transformation, increase engagement, support the development of people-centric strategies and boost commercial performance.

A former commercial lawyer with a background in psychology and strategy consulting, bolstered by 10+ years across a top tier legal firm and Big-4 bank, Shadé is very in touch with the human side of a business and how to optimize performance. She is also passionate about advocating for women in business and specializes in equipping them with the confidence, capability and clarity to excel through her Neurofemina Institute.

In 2019 Shadé was recognized as Mentor of the Year for Women in Financial Services and is a two-time Victoria state finalist in the prestigious Telstra Women in Business Awards. She has also been featured in the New York Times, Yahoo Finance, Fast Company and Vice due to her prolific career development content on Forbes and social media, and she has garnered over 2.1 million combined followers.

She is also a 3-time Australian Latin Dance Champion whose contemporary Latin performance promoting unity and collaboration has been featured on TED. 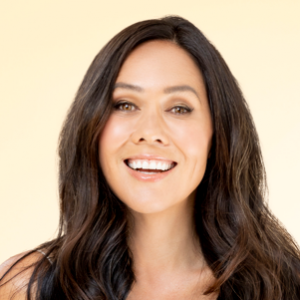 When Mimi Kwa set out to change the world, journalism was her weapon of choice, and it has taken her further than she could ever have dreamed, to become the first Asian heritage female on Channel Nine, anchor news to 40 countries,and interview significant decision makers and notable figures from around the globe.

In her fascinating career spanning two decades, Mimi has interviewed Prime Ministers, bank and corporate CEOs, sports stars, film stars and celebrities. Her experience asa reporter, program host, and news anchor, has given Mimi rare insight into life in front of the camera in pursuit of journalistic truth —a truth that has set her free, both professionally and personally.

Mimi recognises a global shift in consciousness to find both our individual and collective truth and purpose, and she now engages and inspires audiences to understand the new era of transparency and trust, supporting them to make their personal and corporate brands be seen, heard and believed —all accomplished with the art of genuine engagement and conscious communication.

In Mimi’s memoir House of Kwa, published by Harper Collins 2021, she writes about her deeply personal journey of childhood trauma, as well as her Chinese father’s large family of 32 brothers and sisters and her mother’s schizophrenia. For all the thousands of interviews and stories Mimi has told, her own multi generational sweeping family saga is undoubtedly among the most compelling. 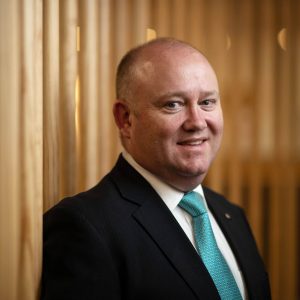 Shane Fitzsimmons was appointed as the inaugural Commissioner for Resilience NSW and Deputy Secretary, Emergency Management with the Department of Premier and Cabinet from 1 May 2020.

This appointment followed a distinguished career with the NSW Rural Fire Service of over 35 years, serving as both a volunteer and salaried member.

He is currently the chair of the State Emergency Management Committee (SEMC), the State Recovery Committee (SRC), Board of Commissioners (BOC), the National Emergency Medal Committee (NEMC)and the NSW Connectivity Innovation Network (CIN). Shane has also been a Director on the Board of the NSW Government Telecommunications Authority since 2012.

In 1998 he was appointed an Assistant Commissioner with the RFS and has held portfolio responsibilities for Operations, Strategic Development and Regional Management. In 2004, he was appointed the inaugural Australasian Fire Authorities Council (AFAC) Visiting Fellow to the Australian Institute of Police Management (AIPM) for a period of 12-months, developing and delivering programs in management and leadership.

In January 2016 he was appointed as a Councillor of the Royal Humane Society of NSW Inc.

Additionally, he is a patron of two charities –Kids Xpress and Coffee 4 Kids. 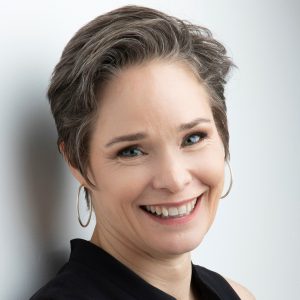 Suzi has had a varied career but all have had common aspects that she loves – the chance to support the development of people and the opportunity to be both creative and organised. Suzi has had jobs in education, youth work, army reserve, not for profits and consultancy and believes that working for public benefit is a privilege, no matter what employer you have. Suzi is currently the Executive Director, Leadership and Capability in the Queensland Public Service Commission and her expertise is in developing people, teams and organisations to deliver on their purpose and objectives – with a particular emphasis on supporting diversity and inclusion, design methodologies and well structured collaborative processes.

One skill outside of the workplace that Suzi is proud of is that she is a plant lover who has progressed from killing 95% of plants under her care to only 30%. It is testament to both her love of living things and her dedication to learning! 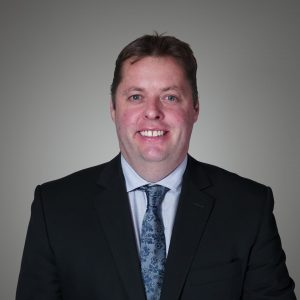 Damian West has extensive policy and program delivery experience in the public sector at both the federal and state level. This includes lead roles in the development of sector wide workforce strategies, oversight of governance and integrity programs, and the implementation of significant policy, program, change management and reform activities. Damian has a deep understanding of public sector administration, organisational development and human resource development together with significant ICT, finance and revenue assurance and operational experience.

Damian has worked with an group of Academics to gain greater insight into performance management, in particular high performance in the public sector. This work has won a number of prestigious international management awards and has generated debate, raised awareness and supported a change in the way the performance management is understood and managed. He has led efforts to strengthen international cooperation and partnerships in the Asia Pacific Region. This included projects to build public sector capacity and strengthen the capability of public servants in Indonesia, Papua New Guinea, and the Pacific (Kiribati, Samoa, Marshall Islands, the Solomon Islands). I worked with Indonesian officials to complete the first three capability reviews of Indonesian government agencies.

Steph is a HR expert with global experience in the provision of HR solutions for both private and public sector clients. Steph specialises in workforce strategy, strategic and operational workforce planning, culture change, organisational design, development and effectiveness.

Kathrina joined the Commission in April 2020 after previously working as a Deputy Secretary for the Department of Communities and Justice.

Kathrina has extensive public sector experience with both state and federal governments. She has held senior executive roles in the NSW Department of Justice, NSW Audit Office and NSW Information and Privacy Commission.

Kathrina has qualifications in law and economics. She is passionate about working in the public interest, and is a champion for diversity and inclusion.

The Public Service Commissioner is an independent office holder.

On 1 August 2022, Tiffany commenced as the First Assistant Secretary of People and Culture, with the Department of Home Affairs.  In this role, Tiffany is responsible for the HR/people functions of the department.  Prior to this, Tiffany was the inaugural Executive Director of the National Careers Institute from its formal establishment in June 2020, within the Department of Education, Skills and Employment (DESE).

Tiffany has held various senior leadership positions across the APS including leading the corporate strategy and governance functions for the Department of Agriculture, Water and the Environment; delivering the Australian Border Force’s national Career Management program to address integrity risks at the border; and several appointments with the Department of Defence, including driving cultural, policy and business process reform in the Defence Honours and Awards program.

Tiffany is an Australian Human Resources Institute (AHRI) Certified HR Practitioner, a member of the AHRI Future of Work Advisory Panel, and a member of the AHRI ACT State Council.  She holds an honours degree in Education (QUT) and a Masters in Business (UNSW). Tiffany, her husband Jason, and three children, live on a small property outside Canberra, where she enjoys growing vegies and tending to the small farm animal menagerie.

Rachael is a highly experienced senior psychologist and executive leader who holds degrees in science, psychology and a Master’s degree in suicidology. Rachael has worked in the field for several decades and led major transformation in the areas of adult community mental health services, community policing, crisis response, disaster recovery and suicide prevention. Rachael led the former APS Mental Health Capability Taskforce, the precursor to the establishment of the Unit.

Sam is a highly experienced HR practitioner and as the Framework Implementation Lead, supports agencies to operationalise the APS Mental Health Capability Framework. She has authored a range of agency transformation tools, including the framework’s Maturity Scale Assessment Tool. Sam has over ten years’ experience as a HR specialist in the APS and prior to joining the Unit was the Assistant Manager of the former APS Mental Health Capability Taskforce. 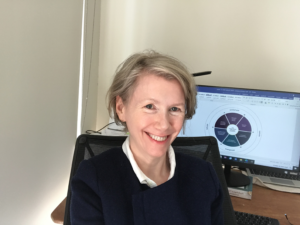 Lucy is a highly experienced organisational psychologist who has recently joined the Unit. Prior to joining the Unit, Lucy was the Mental Health and Wellbeing Adviser for the Department of the Prime Minister and Cabinet and the department’s operational lead for aligning their practice to the framework. Lucy has a wealth of experience working with organisations, including state government, to improve their psychological capability.

Rachael Jackson is the Chief Operating Officer at the National Indigenous Australians Agency (NIAA). Rachael is a certified HR practitioner with AHRI, is a member of the AHRI Public Sector Advisory Panel, the APS HR Professional Stream SES Working Group and the APS Chief Operating Officers Committee. She is the NIAA’s co-chair of the Reconciliation Action Plan Working Group and has recently been working offline to develop an agency transformation plan. Previously Rachael led HR functions at the departments of Department of Industry, Innovation and Science; Finance; and Attorney-General’s and was the Executive Director Governance at the ACT Justice and Community Safety Directorate. Rachael holds an Executive Master of Public Administration (ANZSOG).

Rachael acknowledges the traditional custodians and elders of lutruwita (Tasmania) where she grew up, and the Ngunnawal people in Canberra where she now lives and works